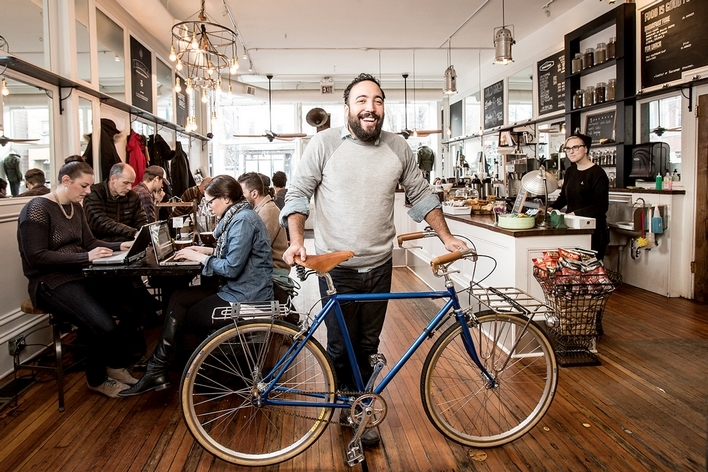 Most $800 bicycles tout features such as a carbon fork and high-end components. At Heritage Bicycles, the $800 base-model, single-speed bike doesn’t even come with handbrakes—yet they are rolling out the door so fast that the almost three-year-old bike-and-coffee shop in Lakeview will generate more than $1 million in sales this year.

When Salvatore, 33, opened Heritage in early 2012, coffee generated 70 percent of revenue. That figure has dropped to 35 percent, but the coffee shop still draws year-round traffic and is so popular that he is opening three coffee-only outposts, one in Fulton Market and two in Uptown—the first of which opens this month.

Salvatore lives above his store with his wife, Melissa, a photographer, and their son. Melissa Salvatore runs her photography studio out of Heritage Littles, a kid-themed version of Heritage a few blocks south of the bike shop.

The co-entrepreneurial ventures represent a family reinvention: Michael Salvatore spent part of his 20s as an options trader in Chicago before leaving in 2009 to build bikes for Bowery Lane Bicycles in New York. The family moved back to Chicago in 2011 to start Heritage, which has 23 employees.

Salvatore, who has a 2003 bachelor’s degree in psychology from the University of Arizona, knows more than what excites his own generation. He anticipated that millennial shopping habits would go mainstream and that, as he puts its, “more people would begin to want something authentic, something made locally, and appreciate the story of a mom-and-pop shop.”