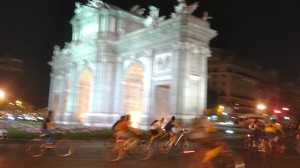 For the first time on record, bicycles have outsold cars in Spain.

Higher taxes on fuel and on new cars have prompted cash-strapped Spaniards to opt for two wheels instead of four. Last year, 780,000 bicycles were sold in the country — compared to 700,000 cars. That’s due to a 4 percent jump in bike sales, and a 30 percent drop in sales of new cars.