↓ Skip to Main Content
Home › Urban Bikes › Cargo Bikes › In Cargo Delivery, the Three-Wheelers That Could

In Cargo Delivery, the Three-Wheelers That Could 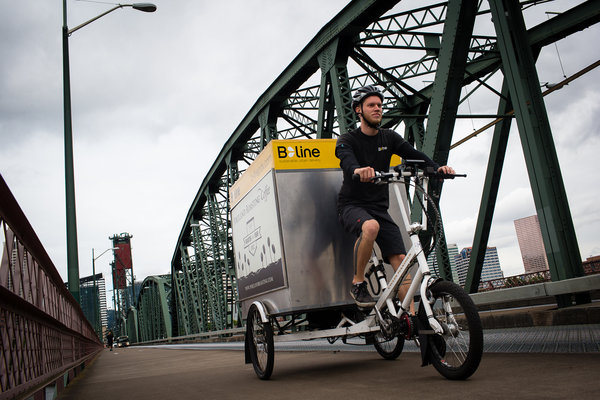 IT’S well-known that Portland really likes its bicycles. But its embrace of bike culture goes beyond its catering to commuters, leisure riders and athletes. So bike-centric is Portland that its residents can have any of the following delivered to their doorsteps by cycle: a pizza, a keg of pilsner, plumbing services or a hot tub. And the list grows from there.

B-Line is the latest example of the greening of a traditional industry. The company’s cargo boxes are comparable in size to a small commercial van, but, unlike vans, the trikes don’t emit carbon dioxide or cause traffic jams at delivery stops. Mr. Jones estimates that B-Line has completed more than 30,000 deliveries that otherwise would have been made by gasoline-chugging vehicles.

When he arrived in Portland in 2008, Mr. Jones already had a sterling bicycle pedigree. As a child growing up in Kentucky, he was a competitive cyclist, and after graduating from college he took a job planning bicycle pathways in Bend, Ore.

Then came a teaching stint in Japan, which he capped off by cycling 11,000 miles on a circuitous route from Tokyo to Ireland that took 13 months to complete.

“I saw bikes carrying goods and providing services,” Mr. Jones recalls, “from the typical loaded-down rickshaw on the streets of India to a more modern bike in Europe carrying bread or delivering the mail.”

A few years after returning to the United States, he began looking into business ideas that could “improve the overall livability of the community,” he says. Discovering that there were gaps in urban transportation, he started to consider freight. “You can move a lot of volume and weight into an urban core, but how do you get the smaller parcels out to all the end users?” he wondered.

The answer, typically, is individual vehicles — from cars to box trucks to semitrailers. Mr. Jones noticed that around Portland, many of these vehicles were often half-empty during deliveries. Moreover, they seemed to be handling a collection of small parcels: a box of paper, a bushel of broccoli, five pounds of coffee. Mr. Jones saw an opportunity. But first he needed a business plan — something, as it turned out, that wasn’t on the minds of early potential rivals.

Paul Gilles, vice president for operations at Portland Roasting Coffee, met with some of those competitors. “It was: ‘Hey dude, I have a really cool way to deliver your coffee. It’s going to be awesome,’ ” he recalled of his meetings with other cycle-delivery start-ups.

In contrast, Mr. Jones showed up ready to talk about his pricing structure. “He approached us as a business person,” Mr. Gilles remembered. B-Line got the job, and now it makes up to 150 deliveries a day for more than a dozen clients, using a fleet of six trikes. The company is on track to have more than $400,000 in revenue this year, Mr. Jones says.

“Historically, bicycle-based companies have been a very informal sector,” says Jennifer Dederich, co-owner and manager of Portland Pedal Power, which specializes in business-to-consumer bicycle delivery — bringing large catered lunches to law firms, for instance. This presents both an opportunity and a challenge for Ms. Dederich and Mr. Jones, both of whom are now focused on expanding their companies.

“A lot of what we’re doing is convincing future investors that our model works and that we can formalize this sector of business,” Ms. Dederich says. Mr. Jones, too, is looking to attract investors in order to bring B-Line to other cities.

One strategy that both B-Line and Portland Pedal Power have devised is plastering the sides of their cargo boxes with advertisements. A majority of B-Line’s delivery customers spend extra to have their company logo displayed on the cases while their goods are weaving through town, and some clients, including Google and the Oregon Museum of Science and Industry, have used B-Line expressly for advertising.

Pedal Power offers a similar advertising model, along with social media marketing for its clients. And Ms. Dederich makes it a priority to hire cyclists with other skills that can be used in the business — like photography, videography and Web design.

THOUGH B-Line’s cargo trikes are nimble and efficient, its delivery service isn’t necessarily less expensive than the alternatives. In an e-mail, Yalmaz Siddiqui, the senior director of environmental strategy for Office Depot, for which B-Line has delivered 20,000 cartons of supplies so far this year, listed the boons to working with B-Line. The list did not include a cost benefit.

In fact, Mr. Siddiqui wrote that “on a per-delivery basis, B-Line is a more expensive option.” But he added that customers “love the fact that their office supplies are coming by bike,” and that Office Depot enjoys “the idea of big green companies like ours supporting small green companies like theirs.” He says these factors help Office Depot make a financial case for using B-Line. Most of the half-dozen B-Line customers interviewed for this article mentioned a similar emotional motivation. “It feels good psychologically knowing that our delicious fresh bread is in that cargo box,” says Claire Randall, a co-owner and general manager of Grand Central Bakery, a B-Line customer. For her and her partners, it’s even a personal point of pride. “It killed us that all of our deliveries were in a van,” Ms. Randall adds. “We’re all avid bikers.”