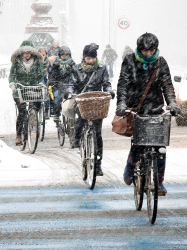 Copenhagen city planners have set out to get fully half of the citizenry to cycle by 2015 — a goal that will require an additional 55,000 people to ride rather than drive. (Encouraging cycling is also a part of official Danish health policy: The city estimates that biking already saves about $300 million annually in health costs.)

On Queen Louise’s Bridge, the city has installed a bike counter that ticks off the number of cyclists that have passed each day, giving riders a sense that they’re part of a movement, not just lost in the crowd. At many intersections, the city has installed footrests for cyclists waiting at red lights emblazoned with friendly messages like, “Hi, cyclist! Rest your foot here … and thank you for cycling in the city.” But the most innovative of all is the “bike butler” program: brightly clad city workers who tidy up the bike parking areas, and will even do minor repairs while the owners of said bikes are away.