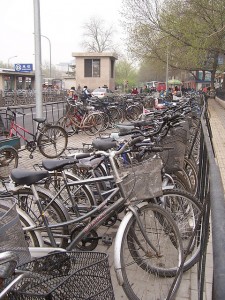 Beijing’s municipal government is urgently calling for a comeback of the old-school bicycle. In June of last year, 2,000 public bikes appeared in two downtown districts in Beijing.

The cycling scheme is intended to fill gaps in Beijing’s public transit network, reduce congestion, and improve air quality. But to any Beijinger who once saw the upgrade from bikes to cars as an iconic step-up into the middle-class ranks, this program is an ironic reminder of the country’s blind pursuit of GDP growth. It is an example of the government’s lack of foresight in dealing with the side effects of economic policies: When tax reductions and cash subsidies were issued in 2009 to stimulate automobile consumption, the government probably didn’t expect citizens to hoard 1.6 million new cars in just two years and completely clog Beijing’s roads. New regulations had to be adopted to limit the number of cars. And now, the city government is betting on the public bicycles, an increasingly popular choice of transportation in cosmopolitan cities such as Paris and New York, and in domestic cities such as Hangzhou, where 70,000 bikes are rented 260,000 times daily.